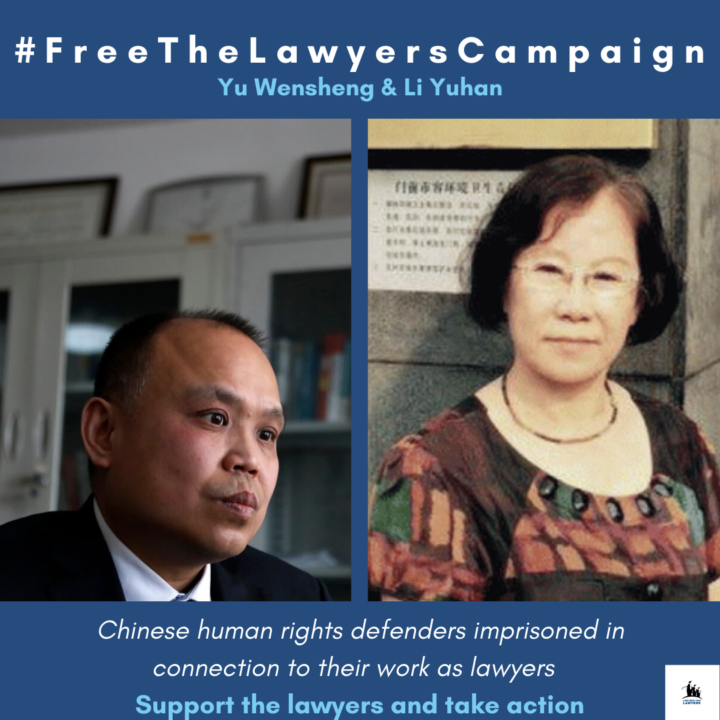 In order to provide protective publicity and support to lawyers who are serving long prison sentences, Lawyers for Lawyers has launched the worldwide two-year long #FreeTheLawyers Campaign on 10 December 2019. The campaign consists of a series of activities, including interventions, social media campaigns, individual petitions and submissions as well as advocacy on targeted cases from different parts of the world.

Li Yuhan is a human right lawyers from Beijing, who has represented sensitive matters of freedom of belief and access to government information. Li Yuhan was placed in detention in October 2017, on charges of ‘picking quarrels and provoking trouble’. She has been detained since, but no official trial has yet taken place.

Yu Wensheng is an outspoken human rights lawyers who has often been actively involved in politically sensitive cases against the government. His clients have included multiple human rights lawyers such as Wang Quanzhang. Yu Wensheng was first detained in 2015, and arrested for a second time in January 2018. After being held without trial for more than 500 days, he was given a secret, closed door trial on 9 May 2019, contrary to Chinese procedural law. Yu Wensheng was sentenced to 4 years imprisonment and deprivation of political rights for 3 years.

Lawyers for Lawyers has chosen to include these two lawyers in their campaign because of their continuing efforts to protect the rule of law in China, which has caused them to be arrested, deprived of their license to practice law, and continuing harassment.