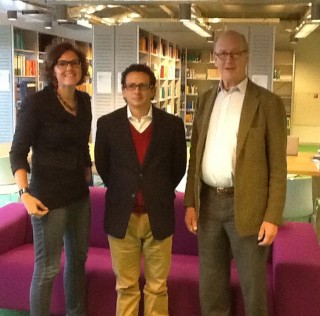 Colombian lawyer David Teleki visited the Netherlands on 10, 11 and 12 October 2012.

Teleki works in Colombia as a criminal lawyer. Among others he stood by Jesse Quintero, one of the defendants in the Colmenares-process. Teleki received many threats via telephone and social media from the moment he started working on this case. IN order to ensure the safety of his family he saw himself forced to withdraw from the case in June 2012.

The visit of Teleki was mainly aimed at collecting more information about the Dutch Bar Association, since Teleki is working in Colombia to establish a Colombian Bar Association as a representative of the Fundacion puniend organisation, together with a number of other lawyers’ organisations united in the Comité Ejecutivo de la Abogacia.

Currently, there is no independent Lawyers Association in Colombia. The country has hundreds of smaller lawyers collectives, but these organisations are not capable of protecting individual lawyers against government interference. To counter future government intervention and to improve the working conditions of Colombian lawyers, the activities of the Comite include the drafting of a new Lawyers Bill, which will also be used to establish a Bar Association.

In the Netherlands, Teleki has met with L4L and Amnesty International Netherlands, and with Professor Floris Bannier. Bannier, former Dean of Amsterdam, has been working as a lawyer for many years and is Emeritus Professor Advocacy at the University of Amsterdam.

L4L supports the initiatives of the Comité and is disposed to assist them together with Floris Bannier in the preparation of the new Lawyers Bill. For more information about the issues that lawyers in Colombia in the exercise of their profession in the country, see the Colombia country page.