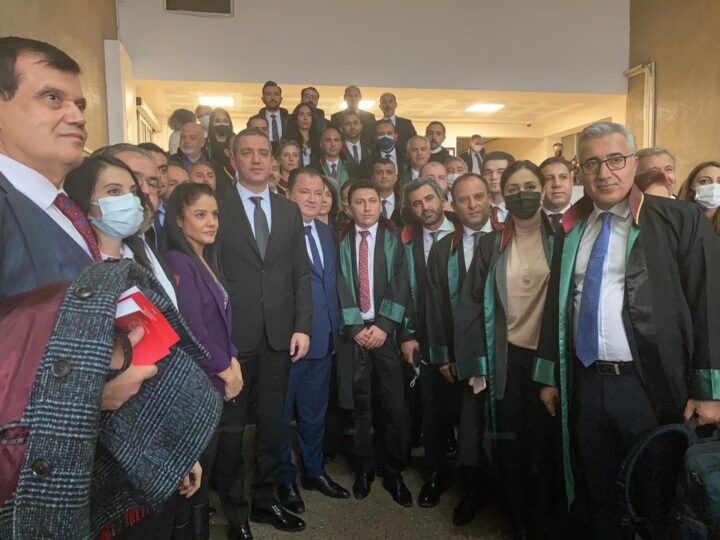 In reaction to that statement, the ABA issued a statement:“We watched with surprise and caution the speech of Ali Erbaş, Head of Religious Affairs, who insulted a part of humanity with hatred and targeted them publicly […] We respectfully proclaim to all the public that we condemn with great surprise and caution the person mentioned and the mentality that agrees with him.” Furthermore, on 27 April 2020, the ABA filed a complaint against the head of Turkey’s Religious Affairs Directorate.

Hereafter, the Ankara Prosecutor’s office launched a criminal investigation against 10 Executive Board Members and 1 lawyer of the ABA.on suspicion ofof violating article 125 of the Turkish Penal Code (publicly insulting a public official for expressing religious beliefs, thoughts and opinions), facing a maximum penalty of 2 years imprisonment or a judicial fine.

The first hearing in the case took place on 15 December 2021. Several presidents of bar associations from all over Turkey as well as many lawyers were present at the hearing to support their colleagues.

During the hearing, the board members of the ABA and their lawyers argued that the speech of the Head of Religious Affairs, which was broadcasted in all mosques in Turkey, should be considered as hate speech, because a group of people was stigmatized based on their sexual orientation. They stated that the scope and impact of the sermon was therefore huge and argued that the state violated its responsibilities based on the European Convention on Human Rights.

With their statement, the ABA aimedto protect equality, tolerance and human dignity, reflect their concern about hate speech and prevent public reaction. The ABA sees it as their public duty to take action and protect human rights based on the Advocates Act of Turkey. All the defendants and their lawyers pleaded for acquittal.

At the hearing, there were also a number of lawyers present on behalf of the Head of Religious Affairs. They argued that the Head of Religious Affairs in his statement, was just quoting the Quran and discussing religious requirements. According to them, no violence was incited. They stated that all religious officials were insulted by the statement of the ABA. According to them, the defendants should be convicted and punished.

The case is postponed to the 9th of March 2022 to hear two more defendants, who could not be present during the  hearing. Lawyers for Lawyers will continue tomonitoring this case.

The criminal prosecution of the ABA forms part of a broader effort to undermine the independence of Bar Associations, and the legal profession more widely, in Turkey. Besides criminal investigations launched into Bar Associations, in 2020 the Attorneyship Law No.1136 was amended, allowing for the creation of multiple associations in one province. It has been reported that these amendment aim at weakening “the existing bar associations in, for example, Istanbul, Ankara, Izmir, and Diyarbakir – many of which are outspoken critics of the Turkish government regarding the rule of law and human rights and actively support the fight against torture”. This is one of the first cases against Bar Associations to go to trial, but other cases are under investigation.