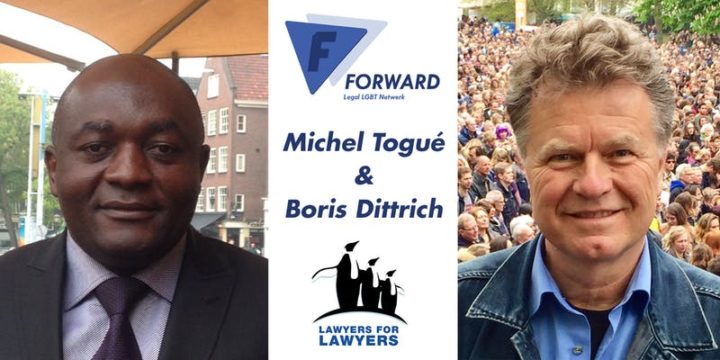 On International Coming Out Day, FORWARD and Lawyers for Lawyers (L4L) are organising a special event with guest speakers Michel Togué and Boris Dittrich. Together Michel and Boris will talk about their work, experiences and challenges in the defence of LGBT+-rights. The event will take place on 11 October at 18.00 in the auditorium of De Brauw Blackstone Westbroek, followed by networking drinks in the office bar. This promises to be a very inspiring event, so sign up fast. RSVP here!

Michel Togué is an activist, adviser and human rights lawyer based in Cameroon, and fights for improving human rights in Cameroon and the rest of Africa. Over the past 23 years, Michel has assisted many people, including LGBT+ activists and those who are persecuted for their LGBT+ identity. Together with his colleague Alice Nkom, Michel represented Jean-Clause Roger Mbede, who was sentenced to 3 years imprisonment for professing his love to another man. The matter lead to national debate on the criminalisation of homosexuality in Cameroon. For their work in defending LGBT+ rights, even in the face of intimidation and death threats against them and their loved ones, Michel and Alice received the Dutch Geuzenpenning in 2017.

Boris Dittrich is a human rights activist, writer and politician and member of the Senate for D66. Inside and outside politics, Boris fights for human rights and in particular LGBT+-rights across the world. On behalf of Human Rights Watch, Boris was engaged in the support of LGBT+ groups in Cameroon in addressing the criminalisation of homosexuality and spoke with, among others, the prime minister, minister of justice, members of parliament and representatives of the United Nations in Cameroon. In 2017 he presented Alice and Michel with the Dutch Geuzenpenning.