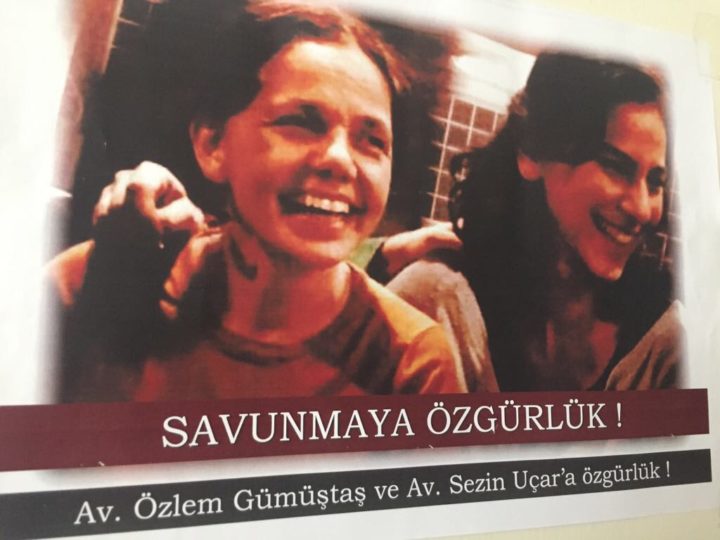 On 29 November 2018 representatives of Lawyers for Lawyers (L4L), Fair Trial Watch (FTW) and lawyers from Switzerland and the Netherlands observed the second hearing in the trial against lawyers Sezin Uçar, Őzlem Gümüstas and Gülhan Kaya of Ezilenlerin Hukuk Bürosu (“Law firm of the Oppressed”). Also observing the hearing were Evert-Jan Henrichs, president of the Amsterdam Bar Association, and Nardy Desloover, ex-president of the Rotterdam Bar Association, who represented the joint Dutch Bar Associations.

This case is one of many cases against lawyers who are accused of involvement in terrorism for activities performed in their professional capacity. Since July 2016 (the month of the attempted coup) more than 1500 lawyers have been prosecuted, 593 lawyers have been arrested, and 208 lawyers have been sentenced – 15 of them in November 2018 alone – to long imprisonments by first instance courts under article 314 of the Turkish penal code. Article 314 criminalizes membership and leadership of an armed organization. Lawyers have particularly been targeted due to the identity or the affinity of their clients.

In this case, the lawyers are prosecuted because they represented family members of people who died in Syria while fighting ISIS, offered legal aid to repatriate the bodies of the deceased, attended autopsies, gathered facts about their deaths and attended their funerals. They also attended protests, presented press statements and posted social media posts about human rights violations. The evidence of the case is partly based on statements of anonymous witnesses which are, according to the defense, largely copy-pasted from similar statements that are used in other cases. The defense maintained that the file contains no evidence for any criminal acts.

Sezin Uçar and Őzlem Gümüstas have been in pre-trial detention for almost a year; they were released on 5 October 2018. Gülhan Kaya was under judicial control since the beginning of the case (duty to notify weekly); at the hearing of 29 November 2018 the court decided to lift that judicial control. However, a travel ban is still intact for all three lawyers, and the case goes on.

The international delegation also attended a gathering in front of the Bakırköy Courthouse to commemorate Tahir Elci, president of the Bar Association of Diyarbakir and a prominent human rights lawyer, on the third anniversary of his death on 28 November 2015.

L4L and FTW urge the Turkish authorities to end repression and persecution of lawyers in Turkey, and to release all lawyers under arbitrary attention. Both organizations will keep monitoring cases against lawyers.